About the original 1000 PlayThinks, Will Shortz of The New York Times said it best: “The most wide-ranging, visually appealing, entertaining, gigantic collection of brainteasers since Sam Loyd’s Cyclopedia of Puzzles almost a century ago.”  Inside The Big Book of Brain Games, you will find an obsessive collection of 1,000 challenges, puzzles, riddles, illusions—originals as well as must-do classics.  With jampacked pages and a full-color illustration for each entry, the book, opened anywhere, is a call to action.  (And it’s guaranteed to make you smarter.) Twelve basic categories include Geometry, Patterns, Numbers, Logic and Probability, and Perception.   An easy-to-read key at the top of each game ranks its difficulty on a scale of 1 to 10, while indices in the back cross-reference the puzzles and provide the answers.  It’s guaranteed to make you smarter.

This is definitely an amazing collection!

What are “PlayThinks”?
1000 PLAYTHINKS is the most compulsive, head-scratching, and–at 5.08 pounds–gargantuan puzzle book ever. An obsessive collection of 1,000 challenges, puzzles, riddles, illusions-both original as well as must-do classics. Jam-packed on the page and illustrated throughout in full-color, with a visual for each entry, the book, opened anywhere, is like a call to action. And once started it’s hard to stop, because at the end of every successfully completed game the puzzle-solver feels smart, successful, and at one with the beauty of mathematics.

Created by Ivan Moscovich, PLAYTHINKS is the first and only book where science, math, and art puzzles all come together. Broken down by chapter, PLAYTHINKS challenges with 12 basic categories, including games of Geometry; Patterns; Numbers; Logic and Probability; and Perception. A special Bonus Round is included for die-hard puzzlers who, after all that, still haven’t had enough. An easy-to-read key at the  top of each game ranks its difficulty on a scale of 1 to 10. The lie-flat spiral binding makes the hefty book completely reader-friendly. So do the answers at the back of the book.

What to expect from PlayThinks
To give you an idea, here are 3 examples of the PlayThinks puzzles included in this book, with their corresponding answers: 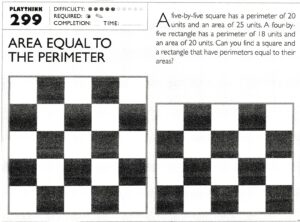 Answer to 299:  The only square with a perimeter equal to its area has four sides of 4 units.  The only rectangle with that property measures 3 by 6 units. 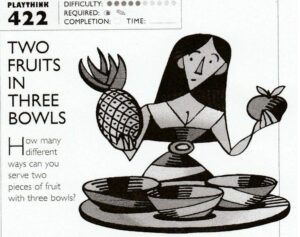 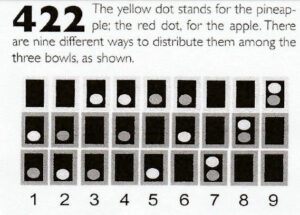 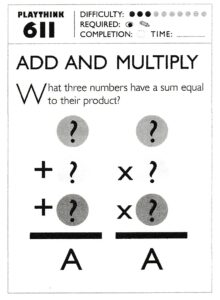 The author has an interesting background
Ivan Moscovich is the author of several books on the subjects of science, mathematics, and art. His Mindbenders series was translated into 12 languages. His 1000 PlayThinks became a bestseller. According to Goodreads, he has published 45 distinct works.  He is a designer and commercial developer of puzzles, games, toys, and educational aids. He has written many books and is internationally recognized in the toys industry as an innovative inventor.

Ivan Moscovich was born to Jewish Hungarian parents on 14 June 1926 in Novi Sad in the Yugoslav province of Vojvodina.  His father was a Hungarian who escaped into Yugoslavia after World War I.  Moscovich’s father was a professional painter but opened a photographic studio which he named Photo Ivan after his son.  He is often noted as being an industrial designer. Moscovich had a sheltered, middle class childhood.

In 1941, Yugoslavia surrendered unconditionally to the Axis powers during World War II. Hungary occupied Vojvodina. In January 1942, Moscovich’s father was a victim of the Novi Sad massacre.  In 1943, Hungary started secret armistice negotiations with the Allied Powers which was discovered by Germany resulting in the German occupation of Vojvodina. Soon after, at the age of 17, Moscovich was taken to the concentration camp at Auschwitz with his grandfather, grandmother and mother.  His grandparents were immediately taken to the crematoria and were killed.

Moscovich was subsequently moved to a total of 4 concentration camps and 2 forced work camps, while his mother stayed in Auschwitz.  Finally, British soldiers liberated Bergen Belsen in April 1945.  Moscovich was sent to Sweden for recuperation before returning home.  There he met his mother who was liberated from Mauthausen by US troops.

After the War (1945-1952)
Moscovich got his first job in Yugoslavia.  A  friend in Marshall Tito’s Ministry of Transport offered him a position repairing Yugoslavia’s railway system which had been damaged during the war.

During the time he worked the position, he received a medal from Marshall Tito himself.

After finishing his university studies in mechanical engineering at the University of Belgrade, he emigrated to Israel, where he initially worked as a research scientist involved in the design of teaching materials, educational aids, and educational games.

Science Museum
Moscovich’s work attracted general interest, which in 1958 resulted in his proposal for the establishment of a novel science museum, the first of its kind in Israel. He became the founder, and later the director, of the Museum of Science and Technology in Tel Aviv. This science museum opened in temporary premises in 1964 and attracted world-wide interest and hundreds of thousands.

The Big Book of Brain Games is where Ivan Moscovich’s science, math, and art puzzles all come together.

This book is guaranteed to give your brain an extreme workout.  It will certainly teach you to think “outside the box”.

I cannot think of any.

As an Amazon Associate I may earn a small fee from qualifying purchases.  You will not pay more when buying through this site.

SPECIALS:   Following are links allowing you to explore inspirational promotions, events, deals and products throughout Amazon.

More brain games can be found under the heading “Brain Games”, by clicking any of the published blogs in the pages listed for the following categories:

In addition, if you want to search for a particular blog, enter its title in the Search bar in the blog roll which appears during blog viewing.

Comments (4) on "The Biggest Book of Brain Games"