This is a writeup of a recently published article by Health24 on the topic:  “Playing video games as a child helps memory later on in life” . 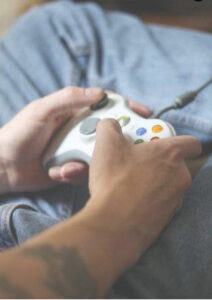 There is an upside to children playing video games:  It  may improve their working memory years later

Video games don’t always deserve the bad rap they often get
The study, from the Universitat Oberta de Catalunya (UOC), found that playing video games as a child can improve working memory years later, even if the person stopped playing for a number of years.

The study’s findings were published in Frontiers in Human Neuroscience and involved 27 people between the ages of 18 and 40, with and without any kind of experience with video gaming.

The study was carried out over a month.  The researchers analyzed participants’ cognitive skills, including working memory, at three points: before starting the training in video gaming; at the end of the training; and fifteen days later.

No, video games don’t make you violent and they’re not only for loners.  Here are 5 misconceptions of videogames, debunked.

It increased the size of some regions in the brain, or caused functional changes, such as activating the areas responsible for attention or visual-spatial skills.

“People who were avid gamers before adolescence, despite no longer playing, performed better with the working memory tasks, which require mentally holding and manipulating information to get a result,” said Dr Marc Palaus, from UOC.

Palaus added that they also found that participants who played regularly as children outperformed those that had not in processing three-dimensional (3D) objects. However, he explained that these differences were mitigated after the period of training in video gaming, when both groups ended up showing similar performance levels.

Palaus explained that for their study, they used a 3D platform-adventure video game, but that there are several genres of video games that can influence cognitive functions differently.

The common denominator in all these games, he added, is that they involve elements that make people want to continue playing, and that the game gradually gets harder and presents constant challenges.

“These two things are enough to make it an attractive and motivating activity, which, in turn, requires constant and intense use of our brain’s resources, adding that video games are a perfect recipe for strengthening our cognitive skills.

Nonetheless, Palaus stressed that these cognitive improvements have a limited effect on the performance of other activities that are not linked to video gaming. This, he said, is the case with most cognitive training.

This was one of the conclusions from the article published in Frontiers in Human Neuroscience. The study involved 27 people between the ages of 18 and 40 with and without any kind of experience with video gaming.

“People who were avid gamers before adolescence, despite no longer playing, performed better with the working memory tasks, which require mentally holding and manipulating information to get a result,” said Marc Palaus, who has a Ph.D. from the UOC.

Combining transcranial magnetic stimulation
The study lasted a month and the researchers analyzed participants’ cognitive skills, including working memory, at three points: before starting the training in video gaming, at the end of the training, and fifteen days later. The video game used was Nintendo’s Super Mario 64.

The study also included 10 sessions of transcranial magnetic stimulation. This is non-invasive brain stimulation through the skin without the need to get to the brain tissue that temporarily changes the brain’s activity.

“It uses magnetic waves which, when applied to the surface of the skull, are able to produce electrical currents in underlying neural populations and modify their activity,” explained Palaus.

Strengthening cognitive skills
In this case, the video game used was a 3-D platform adventure, but there are many genres of video game which can influence cognitive functions differently.

“Video games are a perfect recipe for strengthening our cognitive skills, almost without our noticing.”  Nonetheless, he stressed that these improvements only have a limited effect on performance of other activities not linked to video gaming, as is the case with most cognitive training.

How video games change the brain

Scientists are discovering that playing video games can change the brain regions responsible for attention and visuospatial skills.

Scientists have collected and summarized studies looking at how video games can shape our brains and behavior. Research to date suggests that playing video games can change the brain regions responsible for attention and visuospatial skills and make them more efficient.

Videogames are becoming more common and are increasingly enjoyed by adults

Do you play video games? If so, you aren’t alone.  Video games are becoming more common and are increasingly enjoyed by adults. The average age of gamers has been increasing, and was estimated to be 35 in 2016. Changing technology also means that more people are exposed to video games. Many committed gamers play on desktop computers or consoles, but a new breed of casual gamers has emerged, who play on smartphones and tablets at spare moments throughout the day, like their morning commute. So, we know that video games are an increasingly common form of entertainment, but do they have any effect on our brains and behavior?

Over the years, the media have made various sensationalist claims about video games and their effect on our health and happiness. “Games have sometimes been praised or demonized, often without real data backing up those claims. Moreover, gaming is a popular activity, so everyone seems to have strong opinions on the topic,” says Marc Palaus, first author on the review, recently published in Frontiers in Human Neuroscience.

The Palaus study shows that playing video games can change how our brains perform, and even their structure. For example, playing video games affects our attention, and some studies found that gamers show improvements in several types of attention, such as sustained attention or selective attention. The brain regions involved in attention are also more efficient in gamers and require less activation to sustain attention on demanding tasks.

There is also evidence that video games can increase the size and efficiency of brain regions related to visuospatial skills. For example, the right hippocampus was enlarged in both long-term gamers and volunteers following a video game training program.

I have always been interested in knowing if video games did in fact improve cognitive skills and memory later on in life, ever since I saw my young stepson playing video games and later on being able to solve difficult cognitive problems that well-educated adults could not solve.

I wanted to know more about this fascinating topic.  I hope you have enjoyed reading about this connection between playing video games and improved memory and cognitive skills.