This is a writeup on the  article that was recently published in “Being Patient” and entitled  “It’s Never Too Late:  Brain Exercise to Boost Cognition at any age”. 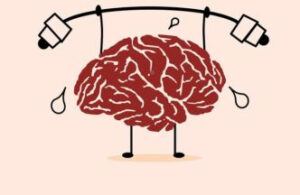 Age-related cognitive decline is as normal as loss of muscle mass
But just as regular exercise can keep aging bodies in shape, healthy lifestyle habits and brain exercises can slow cognitive decline and even improve cognitive functioning.    Like muscles, the brain becomes stronger with exercise even later in life.   Good sleep, a healthy diet and regular exercise can help maintain brain health as well as body health.

Does exercising the brain work?
“Being Patient” spoke with Dr. Majid Fotuhi, a neuroscientist and the medical director of NeuroGrow Brain Fitness Center in McLean, Virginia, about his research and work on brain rejuvenation and rehabilitation.

Dr. Fotuhi has over 25 years of research and clinical experience at John Hopkins and Harvard Medical  School in the field of memory, aging and brain rehabilitation.

What actually happens to our brains when we make them stronger?

Your brain and its neurons
According to Dr. Fotuhi, your brain is made up of cells called neurons, and neurons have extensions which connect with other neurons. Your brain has thousands of blood vessels and capillaries that feed the neurons and the connections between them. We know for a fact that you can improve your brain function by a number of ways.

First, increase your number of neurons. When you exercise a lot, you have more neurons.  It is really incredible that you can create more neurons through vigorous exercise.

Secondly, you can make more fiber bundles, the little highways from one side of the brain to the other. The more you use your brain, the more you solidify those different parts of the brain.

Thirdly, you can have more synapses. When a neuron approaches another neuron and touches it, it provides support for communication. And the more of these synapses you have, the stronger the communication will be between neurons in different corners of your brain. If you have a lot of synapses, you can think better, you can solve more problems, you can remember better.

Grow Your Brain
As you exercise or meditate, you actually create more of these branches of blood vessels that carry more oxygen and nutrition to your brain. So those are four ways that you can literally grow your brain and make yours a healthier and stronger brain. And these things don’t require years of work to get there. “With our brain fitness program”[link], says Dr. Fotuhi, “which is actually a brain rehabilitation program, you can get results within three months.

Make Your Brain Strong
When we say that we’re making our brains stronger, what does that mean? Are we getting smarter. does it mean that our memory will be enhanced?

You can work out these different brain areas just like you can work out different muscles. When you exercise you increase blood flow, synapses and fiber bundles throughout your brain.  Therefore, exercise is helpful for all brain areas. But if you have issues with attention, then you can focus on doing targeted brain games that challenge your attention and concentration.

For example, you can memorize a deck of cards. Or you can play brain games that require you to think fast, solve problems fast, and respond fast…. Your brain has different components, and different components are related to different brain functions. If you do targeted brain training, you can improve those areas of the brain.  Dr. Fotuhi adds:  “That’s what we do here.”

How Important is Age in Rehabilitating the Brain?
Can these targeted brain games be used across all ages? Can you improve memory function and processing in kids with attention problems?

Measuring the effects of Brain Games:  do they really help?
According to Dr. Fotuhi: “Yes.  The problem with the lack of sufficient evidence that brain games help is due to the way we measure cognitive function.   Your brain is such a complex organ with so many functions that unless you look specifically as to which part of the brain you’re targeting, and which brain functions actually improve, then you won’t see results. You need to be more targeted in the deficits and the results you’re looking for.

Dr. Fotuhi adds:  “We’ve found that in our patient population of people in their 60s and 70s, 84 percent of patients had statistically significant improvements in their cognitive abilities.”

I completely agree with Dr. Fotuhi.  I have had many friends in that age group take such brain training and found that they benefitted from it.

The brain has a lot of malleability
and that malleability exists throughout life, and if you do targeted brain training in the setting of everything else—diet, exercise, sleep—you see better results.”

Are there things we can do to improve our memory today, and is there a point at which it’s too late?
According to Dr. Majid Fotuhi: “It’s absolutely not too late at all. There are lots of things that can improve your brain health and brain function. A lot of people assume that when they get older, they cannot improve their brain function, and that’s absolutely wrong.”

Your brain has a high degree of malleability, your brain has what’s called neuroplasticity, and there are many things you can do to make your brain younger by six or even 10 years.

How much of a difference does age make in the success of the program? Is it harder to improve if you start at a later age?
Dr. Fohuti’s says that his clinic obtained the best results in younger patients with milder problems. So a 63-year-old with a 30 percent decline in memory and a 40 percent decline in processing speed would have much better results after three months than an 84-year-old with 80 percent decline in memory and a 90 percent decline in processing speed.  The best time to reinvigorate your brain and develop healthy habits if you don’t have cognitive decline already is in your 40s and 50s,  says  Dr. Fotuhi.   He continues:  “But it’s never too late. I had a patient who was 79 years old, and she could memorize a list of a hundred words. So we do have patients who are older, and they may require more than three months, but their brain has plasticity. It’s not that they can’t, it just takes more effort.”

Can Brain Rehabilitation Help People with Dementia?
Is it possible to work against the disease and somehow slow it down and improve memory?   Dr. Fotuhi states: “We have had some patients come and take part in the program even though we don’t recommend it for people with significant cognitive deficits, and the results have been interesting. We see patients become calmer.  They smile more, they sleep better.  So there are some small benefits in patients with severe cognitive deficits. But people who benefit the most are people in their 50s and 60s who have started to show cognitive deficits.”
I completely agree with Dr. Fotuhi there.  I have friends in that age group who have greatly benefitted from brain rehabilitation.

I completely agree with Dr. Fohuti that brain training can be a great help.  I have friends in that age group (40 to 50) who have greatly benefitted from this type of brain rehabilitation, feeling that they “started brain training in the nick of time” .

None that I can see.